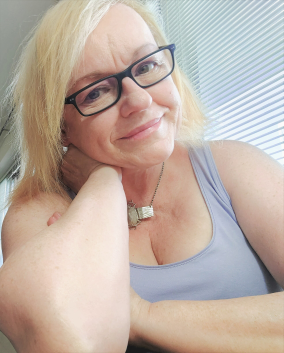 BORN: Edmonton, Alberta, almost in an elevator after my parents had been out dancing 'til 3 AM.

WORKED: As a mild-mannered assistant in the disciplines of politics, marketing and sales and most recently, global financial services.
Dear Readers,

Welcome to my website. Here are the low-down, meaty-bones on me:

I was born in the blustery month of March in 1963 in Edmonton, Alberta, Canada to Kevin and Karin McCarthy; paternal grandfather Judge John Joseph McCarthy emigrated from County Cork, Ireland to St. John's, Newfoundland, Canada. My mother was born in Germany. I grew up in Kanata, Ontario with three siblings and was educated at Stephen Leacock Public School and Earl of March Secondary School.

Know before you take the plunge that my urban paranormal novels are nothing close to politically correct. Suffice it to say, I get a thrill from writing, to take myself and readers into a fantastical world. For me, fiction gives permission to the imagination to have a mind of its own. For those of you who wonder, the answer is no. I'm not personally into BDSM... maybe a lighter version on the broad spectrum, though some of my characters surely adore the hardcore stuff. I applaud them for relishing a good spanking or much more. In the context of consensual pleasure, whatever floats your boat.

During my seven-year stint as a Legislative Assistant on Parliament Hill (1984-1991), I undertook part-time studies in French language and political science at the universities of Waterloo and Ottawa. The political work experience taught me the invaluable arts of obfuscation and misdirection — two essential components of fantasy fiction. I've also benefited greatly through my involvement with Ottawa Independent Writers, and by attending workshops on creative writing, graphic design, marketing, to include learning from the inevitable pain of dealing with editors, without whom all writers would come off as unprofessional. I'm especially grateful for the influence of my paternal grandmother who wrote limericks and played piano for silent pictures, and whose Newfoundland sense of humour shines throughout my series in the form of Auntie Aileen. Fans often express to me that Auntie is their favourite character and to this I say, thank you Nana!

Currently I'm reading "12 Rules For Life" by Dr. Jordan Peterson. I last finished "River in the Desert: A Modern Traveller In Ancient Egypt" by Paul William Roberts as well as "The Soul of America: The Battle For Our Better Angels" by Jon Meacham. Never thought I'd say this about a history book, Jon's book is engaging but then he won a Pulitzer so expect nothing less. Previously I read "The Mastermind" by Evan Ratliff, a rip-roaring true story about an insane, criminal Internet genius and prior to this, I devoured "Shake Hands With The Devil — The Failure of Humanity in Rwanda" by Roméo Dallaire. I won't sugar-coat my impressions of his book, which is a gut-wrenching story that stays with you long afterward [consider this your official warning]. Dallaire's description of genocide (Page 430; 2019 Edition) is by far the most poignant I've ever read, visualizing the brutality that is generally lost when people refer to genocide through the abstraction of numbers.

When in the process of writing a new fantasy novel, I avoid reading other fantasy works and prefer to stick with non-fiction. It's important for writers to read outside their comfort zone. But I love reading fantasy too. For the past seven years, I've been writing and at times, slogging through novel seven, which has currently surpassed the 237,000+ word mark. This seventh novel is a beast, that when finished will make my head spin with joy. Writers learn early on that with each new novel, the writing gets harder, gets better.

Dayum! Talk about a long-winded diatribe. You're almost at the end. I congratulate you for getting this far. Only a little more to go.

Many things hold my interest: photographing street art, staying fit and enjoying fun times with family and friends. Some of my very favourite things are music from the 60's & 70's, cycling, stand-up comedy, sun-dried tomato in a salad, Pinot Noir, ice-cold Corona with lime, G&T's, movies and documentary film and last but not least leisure and adventure travel. Things I particularly loathe: deception and going without sleep (notwithstanding the obvious exception for the latter). What really gets my goat though are those who dole out favouritism to a select few vs. treating everyone the same, with a sense of fair-play. It's not that complicated to figure out and I don't care what lies you tell yourself. You are not actively practicing integrity if you're doing so solely because it's convenient or politically expedient.

My heart belongs to the City of Ottawa, the hidden gem of Ontario. So, if you happen to see me selling at an exhibition or other fantasy-related/literary event, in Ottawa or elsewhere, and you're in need of advice on being an Indie author, don't hesitate to drop by my table for a chat. Many fine people have gone out of their way to help me over the years (I'm thinking of you David Three Rats and Nitronium). Their generosity in turn inspires me to give back to the writing community, an activity about which I care strongly. Bear in mind that I also work full-time, like many Canadian artists who support their craft. If you're willing to be patient, then I'm happy to offer a free and honest critique of your short story or one chapter of your as-yet-unreleased-novel. Reach out to me by visiting the Contact page on this site.

Thank you for dropping in and for supporting Indie authors. You are my kind of people!